In today’s world, counterfeits of quality products abound. The sad reality of being a pioneer, American-made company that leads the pack is the flip-side: cheap knock-offs that may look similar on the outside but lack the warranty-backed assurance of our knives, assembled by hand in our facility just outside of Asheville, North Carolina. With the authentic Microtech® name comes a standard that exceeds the highest tolerances and pushes the limits of what a knife can do.

Day in and day out, the team here receives inquiries on counterfeits—customers wondering if their knife is a counterfeit, sending in their knife for service only to find out it is not authentic, etc. We hate to see our customers get tricked by fake “Microtechs”, so we decided to compile a guide of things to look out for when detecting a knife’s authenticity.

Lasering is a common giveaway when comparing real vs. counterfeit Microtechs. On each individual Microtech knife, the logo has a specific designation for its positioning, size, color, etc. Often (though not always), counterfeit Microtechs have lasering and logos that are off center, incorrectly spaced, tilted, uneven, or simply have low quality lettering and appearance. Lasering work may show improper model of a knife and production dates that do not line up with actual production time of given models. Production dates should be in format (mm/yyyy). Serial numbers are often incorrect—while not all counterfeits have incorrect or repeating numbers, we have noticed that many bear the serial numbers 556 or 885. If the position, color, or quality looks off-kilter compared to the appearance of an authentic Microtech® knife, this may be a sign to steer clear.

Microtech® Knives uses proprietary tri-wing screws made in-house. We do not outsource our screws, and they are unique to our brand. Replications of our screws will have incorrect coloring, finish, or dimensions. The screws may look cheap or have alternate shapes, curves, and designs. If screws look different from our proprietary ones, this is a red flag. Please note that the appearance of our screws has changed over time. Tri-wing is the current version.

Counterfeit blade profiles often have incorrect dimensions or blade/color configurations that we have never made. Counterfeit blades often (not always) have a black finish. Many times, the hardware on a recently released knife will be an outdated style that was used in older models. If you see a newer model knife with outdated hardware, this is a clear sign. Counterfeit knives often feel heavier in the hand—many are made from die-cast metal versus machining from solid metal billets. Handles often have improper finishes and feels, or have colors we do not use.  The smoothness and reliability of firing also suffer drastically, especially over time. The overall appearance may look cheap and not up to par, though many may not appear so until further examination/use.

As a general rule: if the price seems too good to be true, it most likely is. As of right now, we don’t sell any knives under $200. If a counterfeit is purchased, the packaging will also be wrong, with inauthentic or incorrect logos and design. 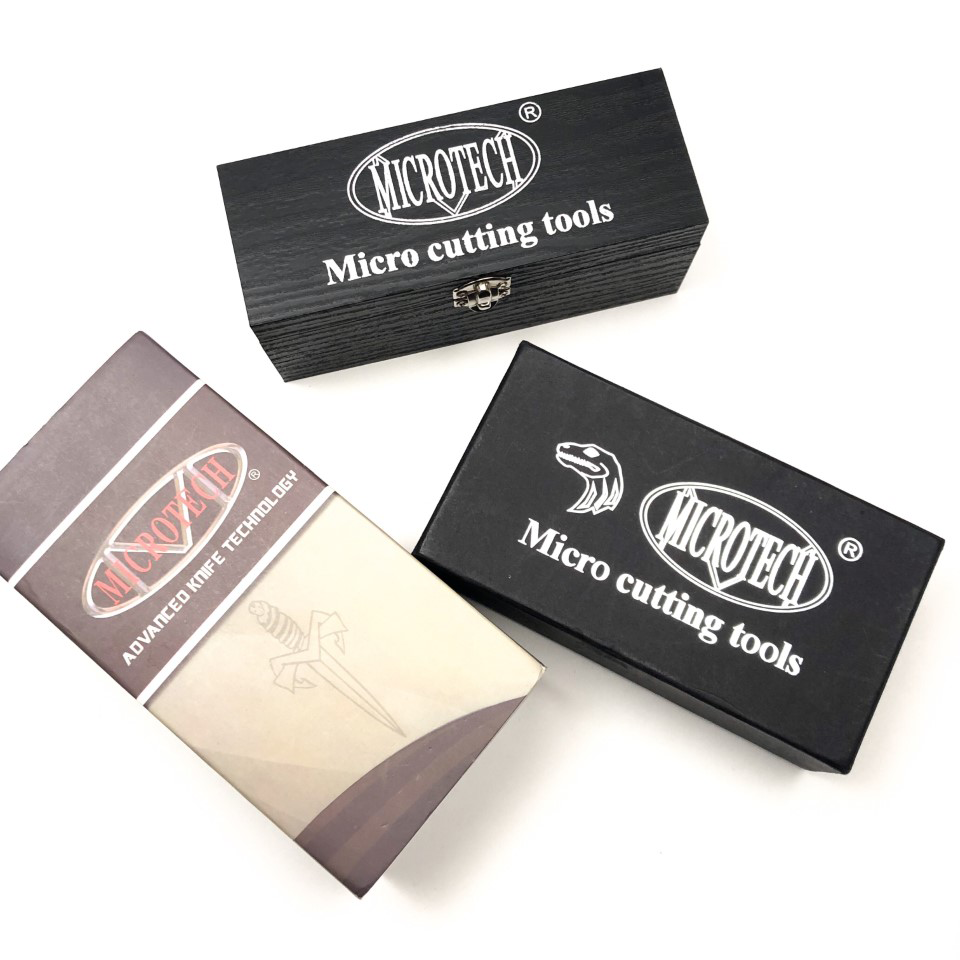 An authorized dealer is a seller who works directly with Microtech® and is officially approved by us to sell our products. We have an interactive dealer locator on our website, which can be found here. Don’t despair if you can’t find a dealer near you—many of our dealers ship, some internationally.

Upon arrival, your knife is checked in through our repair department. You may receive an email confirmation that we received your knife. We may not detect the counterfeit discrepancy immediately.

You will receive an email from our warranty department notifying you that we have determined your knife is not authentic. The email will notify you that we can return your knife to you, but we will need to remove any markings that indicate it as a Microtech®. This often involves blasting the pocket clip or blocking out incorrect labeling with lasering. You will also need to provide $15 to cover return shipping. We offer our assistance in locating an authentic Microtech® knife through one of our authorized dealers.

While this guide is in no way exhaustive, we hope that it was helpful in identifying counterfeit Microtech® products. Please keep in mind that we cannot guarantee that any particular knife is an authentic Microtech® knife unless it is purchased through one of our authorized dealers.

We stand behind the integrity of our products and back each and every one of our knives with a Lifetime Limited Warranty. We are proud to create the world’s best cutting tools.